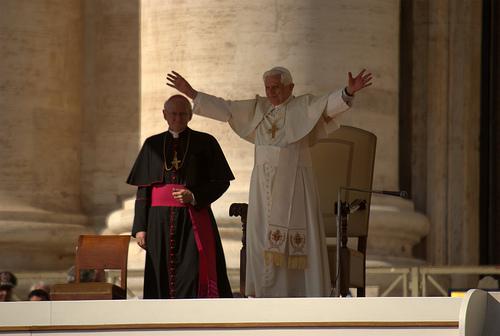 When Pope Benedict XVI announced his resignation on Feb. 11, 2013, he became the third pope in history to voluntarily do so — and the first in more than 600 years. While religious leaders determine who will be the next Bishop of Rome and prepare for the installation of a new leader, visitors to Rome are showing renewed interest in sites of religious and historical significance related to Catholicism and the Papal legacy. Start your trip right with this papal history lesson.

Electing a New Pope and Celebration

When the need for a new pope arises — generally due to the death of the previous leader — the new pope is elected by a conclave of leaders from the College of Cardinals, which secretly votes on the individual who will lead the 1.2-billion-member Roman Catholic Church. However, this election promises to be unusual. While a 1996 decree by Pope John Paul indicates the conclave must begin between 15 and 20 days after the pope abdicates, church leaders are concerned about leaving the church leaderless during the Holy Weeks leading up to Easter.

As a result, Pope Benedict is expected to deliver a special decree allowing for the conclave to begin on March 15, 2013, with the coronation of a new pope taking place on March 24, the week before Easter. This will allow the new pope to preside over traditional Holy Week celebrations, including the Palm Sunday Mass in St. Peter’s Square, and masses on Holy Thursday, Good Friday and Holy Saturday in the Vatican Basilica.

An Audience With the Pope

Until Benedict XVI stepped down on Feb. 28, 2013, and after the election of a new pope, visitors had the opportunity for an audience with the pope outside of holy holidays. On Sundays at noon, the pope appeared in the second window from the right of the Apostolic Palace to pray the Angelus prayer and blessed the crowd in St. Peter’s Square. The pope also held a General Audience on Wednesday afternoons; tickets were required for the mid-week events. It is possible the new pope will carry on this tradition.

Rome During the Conclave

In the weeks before the conclave, cardinals will be traveling to Rome to meet with the electors and other behind-the-scenes campaigning will be taking place. During the actual conclave, all eyes will be on the Sistine Chapel, adjacent to St. Peter’s Basilica in Vatican City. The conclave meets in the chapel to vote on candidates; a chimney is installed on the roof of the chapel, and when the smoke from the chimney (created by the burning of the ballots) turns from white to black, a new pope has been chosen.

During the conclave, the voters are sequestered from the world, forbidden from using television, radio or the Internet. They are housed in the Domus Sanctae Marthae, adjacent to Basilica Saint Peter. During the conclave, access to the Sistine Chapel and other sites around Vatican City may be restricted or limited.

As the world center of Catholicism, Rome is home to many important religious landmarks. Vatican City, an independent city-state in Rome, is the center of all church operations. Basilica di San Pietro, or St. Peter’s Basilica, is the most recognizable landmark. The Michelangelo-designed dome is the centerpiece of the basilica, which is the final resting place of Saint Peter as well as 91 of the 266 former popes. St. Peter’s is only one part of the Vatican, which also encompasses St. Peter’s Square, the Vatican Museums and the Vatican Gardens.

The Archbasilica of Lateran, also known as the Lateran Basilica, is the official ecclesiastical seat of the Pope. As the oldest of Rome’s four major basilicas, the Lateran Basilica is generally where the inauguration of new popes takes place. This is where you’ll find the Scala Sancta, or Holy Stairs, the steps that led to the praetorium of Pontius Pilate. It’s believed that Jesus stood on these steps, which were moved from Jerusalem in the third century, on his way to trial.

While the papal legacy is especially meaningful to Roman Catholics, visitors from all religions find themselves fascinated by the thousands of years of tradition and history in the Eternal City. With the coming installation of a new leader, thousands of faithful from all over the world will flock to the city, so if you plan to head to Rome to experience the papal traditions, search for a bed and breakfast in Rome or other accommodations now and prepare to be a part of an ongoing history.

About the Author: Writer Regina Hathaway blogs about religion and religious news for several sites. She plans to be in Rome for the Easter holidays and be one of the first to see the new pope.