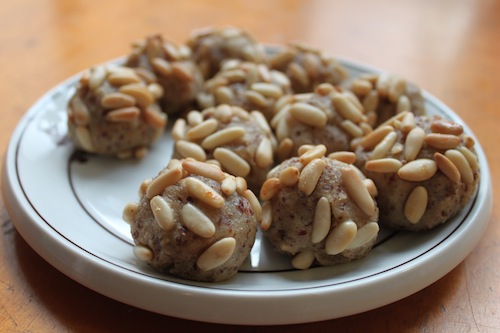 At the risk of being overly honest, Husband and I got into a fight on Thursday. I’m not sure how it happened – one minute we were enjoying a morning cup of coffee, and the next, I was doing that thing we both hate where I obnoxiously insist I’m not mad when we both clearly know that I’m mad.

Ugh, I am so annoying sometimes.

Luckily for me, Thursday was Castañada, which is a Catalonian holiday in the fall during which it’s traditional to make panellets. Kitchen time to the rescue! Panellets are a traditional Catalonian cookie made from almond flour and potato, rounded into balls and covered with pine nuts. And while I cannot attest to the healthiness of this strategy, having to hand-work cookie dough harder than my poor husband’s head is actually quite therapeutic.

So let’s call these bad boys cathartic cookies to fix a fight. After the literal three hours it took to work the dough into its proper consistency, I had seriously burned off some steam. And probably some calories from the aggressive kneading that damned dough required. Here’s how it happened:

We start out boiling potatoes, and boiling mad. There is little talking going on in this kitchen. Keep in mind my kitchen is the size of twin sized bed, meaning that there is quite literally nowhere for our fight to go.

Mixing together the dry ingredients, eggs and potatoes is pretty easy work. But the dough is nowhere near ready; it’s sticky and getting everywhere. I am predictably outraged by this mess beyond reason. Husband promises to clean afterward. I am momentarily appeased.

Dough kneading for honest-to-god hours. We have to to take turns because we (read: I) am tuckered out by the physical effort. My militant battle cries of “Faster!” have broken Husband into fits of giggles. His rallying cries in Catalan have turned me, well, on a bit, which I consider a deviant tactic as he is well aware the effect the language has on my nether-regions. Nevertheless, the kneading turns out to be an amazing way to relieve some stress, as I imagine the obstinate dough is a manifestation of life’s problems and frustrations. (Yes, that’s lame, but it worked!)

Now we get to have the fun of shaping the panellets into fun shapes. Our fight is long forgotten, as we compete at first for the best replica of traditional, professional-looking panellets, and then degenerates into who’s is the most creative. I’m pretty sure there was a panellet snowman on the sheet. Husband, poor thing, thinks this muñeca de nieve is a winner, but alas, he is bested by my panellet rolls that have a bit of chestnut cream inside.

Husband and I deviously debate which panellets to try once they come out of the oven. It’s as if we’re stealing them from Santa’s tray rather than having made them ourselves. But since they’re meant to be tomorrow’s gifts for family and friends, restraint must be shown. We started this mess feuding. By the time the panellets are out of the oven, we’re teaming up to make sure we both get to try all the different flavors.

So today’s kitchen lesson? Making cookies can be surprisingly cathartic – and no judgment for beating up that dough like it just stole your parking spot.

4 thoughts on “Cathartic Cookies: Making Panellets to Fix a Fight”