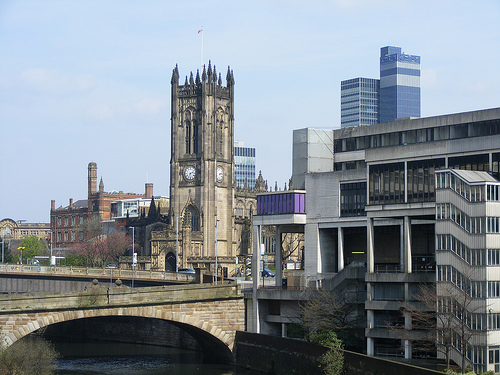 Hey Urban Housewives! Anybody itching for a vacation yet as the winter blues really start to set in? I know I am! It’s right about this time of year that I get a little bit of cabin fever watching it flurry day in and day out in Brooklyn. But that’s not say that I’m dreaming of some tropical paradise – that’ll start right around March when it’s still cold as all get out in this city. What I really start thinking is that I just need a little trip away! So here are three places I’ve been dying to go lately. They’re all in the UK – sticking to a theme here!

I’ll admit I’m not the biggest soccer fan, but I have quite a few friends who are. Thanks to them, I actually know a bit about the Manchester United “football” team, which has always inspired this weird desire to get over to Manchester. Nestled into the south-central part of North West England (there’s a directional mouthful for you,) has some really cool cultural landmarks and a great music scene. It’s also the third most visited city in the UK by foreigners, preceded by London and Edinburgh. I guess it’s a good thing they’ve got so many deals on airport parking Manchester – tons of people are going! I just love the abundance of red brick everywhere, which really reminds me of Boston. I’m dying to head that way and check about Albert Square, the CIS Tower and the award-winning Heaton Park. Someday!

Ok, so Crawley isn’t exactly Manchester when it comes to size or number of visitors each year. But this little town has so much cool history that I’ve always been intrigued about making a visit. Crawley and its surrounding areas have been inhabited since the Stone Age, and was a prominent stop during Roman times for ironworkers looking to buy and sell. Even cooler, evidence has been discovered that leads scientists to believe that the town has been inhabited since the Neolithic period. So cool! Today, Crawley is probably most visited because of its proximity to the Gatwick airport, which is a great alternative to flying into busing Heathrow. Gatwick parking is also great with a lot of options and services for the travel-worn visitor.

The city is actually known as Newcastle upon Tyne, but I’ve given up getting all of that out and just call it Newcastle. (Most people do, so I’m not alone.) I’ll admit that my initial reason for wanting to visit Newcastle is the crazy accent that its residents sport. I’m usually pretty good with accents and understanding them, but holy smokes, that accent gets me every time. Plus, the city ranks among the purported top ten nightlife stops in the country, giving me that much more reason to want to head there for a little escape from New York. Newcastle also has its own airport, meaning getting there wouldn’t involve trains planes and automobiles (just planes, haha.) Airport parking in Newcastle is also really great, so if you do need to park a car, there are no worries. Can’t beat that, I say!