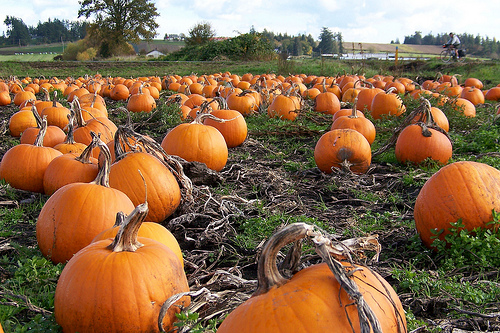 Spooky seasons greetings, Urban Housewives! Everybody getting excited for Halloween? I know I am!

I’ve always been a huge fan of Halloween, because it involves two of my favorite things – costumes and candy. Seriously now, what’s not to love? But over the years, I’ve come to love Halloween even more because of Husband’s fascination with it. My (obviously adult) husband is enamored with Halloween here in the United States like any six-year-old would be.

In Catalonia, where Husband’s from, Halloween isn’t really celebrated. In our experience, Halloween decorations and costumes and parties are getting more popular because of the interest in American culture, but it’s not really a thing. So he’s always found this childish delight in the fact that he’s free to indulge in Halloween celebrations in Brooklyn.

What does that little personal history of Halloween add up to? The need to have an awesome at-home Halloween party with friends, of course! But as we all know, throwing a party in a Polly Pocket-sized apartment can be stressful and logistically difficult to pull off. But never fear! Here we suggest three awesome Halloween party ideas that are affordable, themed and a whole lot of fun. Happy Halloween, you guys!

Buying a murder mystery kit and using it for a Halloween party is one of the easiest ways to execute an awesome themed night. There are a couple reasons I love using them. For starters, murder mystery party kits are usually under $40, so that’s not a bank-breaker for an entire evening of entertainment. But the biggest reason is that it makes people excited to dress up. Nobody wants to arrive to a Halloween party in full 60s flair only to find they’re the only one dressed up, but the murder mystery adds an “officialness” to the night that ensures people will don their themed finest. Plus, it alleviates the stress of figuring out what to dress up as – everyone gets a character and costumes suggestions.

How much do I love assassin? It’s easily my favorite Halloween party game. Everybody dresses up in black, to the theme of nighttime break in, which is great because it’s a costume very few people have to spend money on. Then when guests arrive, you take a quick polaroid of each person, which gets hung around the person’s neck. Then as the party goes on, the goal is to steal as many postcards as you can, until the last person standing is the ultimate assassin. I usually like to actually head outside for this game – we’ve played with about 15 friends and restricted the “field” to one block. That way, you can liven things up with some running around and not worry about messing up your apartment. Once a person has been “assassinated,” they just head back upstairs for drinks and snacks with the others until the game has a winner.

If you’re looking to have a party without mandatory costumes or a theme, but you want to spice things up a bit, consider a little prank to spook guests a bit. Having lots of lit candles at a Halloween party helps to set a spooky mood, but you can easily make them all go out around the same time to give friends a little scare! Buy several long candles and half them vertically, remove a small bit of the wick in the same place on all the candles and then join the halves back together by heating the cut ends. Practice to figure out how long it will take to reach the wick-less section, and then plant the trick candles around the house! Have the lights shut out just a few minutes before the candles will extinguish, and get ready for guests to be officially freaked!